This year we bring summer full circle with Cock Rub! That's right, Jeffery Kent, a Vermont native and family member,  has graciously donated his own gourmet recipe for summer with his very own Cock Rub Seasoning that will be going into the Captain bags this year! Thanks Jeff! 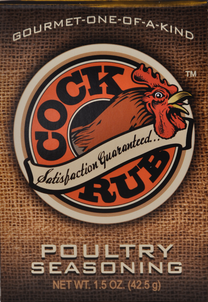 http://www.cockrubspice.com/
About Jeff from his Bio from John Tesar's Knife:
Jeffrey Kent’s first culinary experience came at the age of 13, working in the kitchen on
the Cog Railway in New Hampshire where his father was a steam locomotive engineer. By
age 15, he was working as a pastry chef and full time cook and was introduced to classic
French cuisine at 17. Four years later, he moved to New York City to open Water’s Edge
Restaurant with Brendan Walsh and continued opening numerous restaurants over the
next 12 years, including Arizona 206, earning three stars from the New York Times and
national recognition for its southwestern cuisine. Kent and Walsh started their own fish
business, connecting a large network of suppliers directly with producers, long before
the term “farm to table” became commonplace. Kent has also consulted for restaurants,
including Doral Resort & Spa in Colorado, Mickey Mantle’s in New York City and Double
Tree Hotel in Santa Rosa, Calif. In 1998, he opened Bistro 26 in the Hamptons, earning two
stars from the New York Times before taking on his lifetime passion of yachting around the
world, experiencing international countries, cultures and cuisines.
In 2014, Kent was approached by Chef John Tesar to helm the culinary team at his newest
concept, Knife, a unique and fresh approach on the traditional steakhouse.