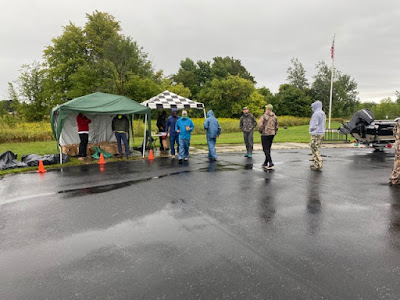 Where to even start? This year the DPC was like no other than we have ever held before yet, it was the same.  It all started on a rainy Saturday morning where everyone checked in wearing waders and rain gear looking like they were on an episode of wild tuna.  People collected their captains bag full of swag including their tourney shirts and buffs from Predator Fly Gear featuring the art of Chole Salomone who donated her time and talent to produce some awesome rewards for participants entries fees. The bags also included flies from 802 Flies and Green Mtn. Troutfitters as well as other goodies. After a soggy check in, approximately 100 anglers set out to an angry Lake Champlain who was grappling with the remnants of hurricane Laura.   A steady rain and winds creating waves of 2-4 ft kept most boats pinned to sheltered areas at best.  By mid day a few anglers had had enough and called it quits. Others stuck it out only to be greeted by severe T-storms in the early evening. Luckily, everyone played it safe and got off the water when the weather went south.
Sunday was dry but the winds picked up even more and most teams struggled to find a happy place to call home. We all met back at the Missquoi National refuge Headquarters who graciously donated their parking lot for our event check in /check out. 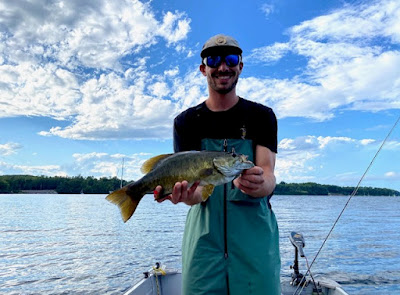 2020 DPC Champ Ralph Kucharek with one of his many bass

After it was all said and done it was angler Ralph Kucharek who took home the DPC Trophy with a total of 15 individual points.  Ralph did his homework and pre fished using different methods to locate the bass.  For his efforts Ralph went home with an Orvis Helios outfit donated by Green Mtn. Troutfitters.  Second Place angler was captured by Mike Kontos with a total of 12 points and Mike won a sweet pack from Lycos designs and an Orvis Hydros 111 SL reel courtesy of the DPC. The 3rd place indy spot went to Brian Zinger with a total of 9 points and Brian will walk away with an Orvis Boat bag.

The top team award went to Master Bass Anglers. Ralph Kurarek and his teammate Nathan Thurbur (Bass Master Anglers) put up 21 point in the most tough conditions you can imagine! They found some sheltered water but kept an eye across the bay where the waves kept building and they would have to cross to return to port.  Watching the waves climb they pulled the plug and as it turns out, they had tallied enough points to take the win. They were rewarded with a pair of Cheeky Boost reels and a pair of Wingo belts. 2nd place team went to long time picklers Ben Wilcox and Michael Woulff of team Bass Badge Plus. Their combined 16pts. won them a pair of Orvis encounter outfits and some nice Wingo belts.  For the 3rd place team it was John Synott & Brian Zinger of team Castaways who put up 15pts. and took home 2 Orvis pro fly lines and a couple Wingo belts.
In the paddle division it was Eric Hurley who scored 8 pts which was enough to earn him 1st place and an Orvis Hydros reel with a Wingo belt to boot. 2nd place angler went to Brian Cadoret who dodged the storms up north in some tribs and won a loaded fly box from Vermont Fly Guys and a Wingo belt.  Former DPC Champ Kemener Whalen took down 3rd place paddler with a total of 6 pts. and earned himself a Scientific Anglers Fly Line and a Wingo belt. 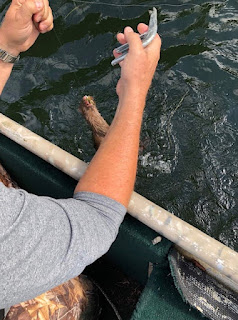 This year was different for sure but one first we experienced was that nobody entered an exotic fish. Not one bowfin, carp, sheepshead, gar etc. So....... true to 2020 form it was Henry Rackliff of team Bass Maskers who caught the most exotic catch of all.  Henry was surprise to find a mink on the end of his line!  That's not a typo, Henry caught a mink on a clouser minnow. We all know there isn't anything that won't eat a clouser and Henry proved it. For breaking the mold, Henry is getting a Orvis Hydros Line and a Quart of maple syrup from Sterling Ridge Resort 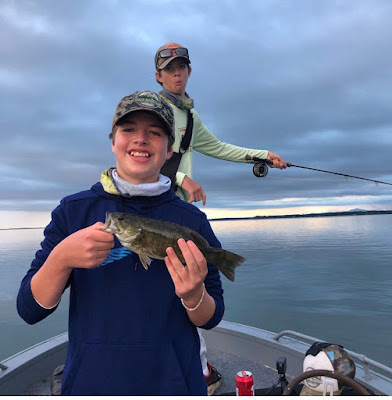 Jr. Angler Quinn Lynch with his 1st qualifier while his brother Noah looks on.

On the Jr. angler front it was Calvin Kontos who braved the weather and caught a nice 3 pointer on a popper which was enough to get him 1st place. Calvin will be getting a Orvis pro sinking line donated by Green Mtn. Fly Fishing Camps.  An honorable mention should go out to Noah Lynch who broke his collar bone Mtn. biking days before the DPC. Noah fished with his arm in a sling all day and never gave up. His brother Quinn has fished the pickle for years and through persistence put up his 1st qualifying bass in the DPC ! To all of our Jr. anglers (Calvin, Noah, Quinn, Adin, Finn, Mia, Eddie)  keep it up! We love having you all on board.

The 1st place pike award goes to Mario Gagliardi with a 34' pike! Mario won himself a Rock River Rods Lug model 8wt. to keep the pike stoke alive. 2nd place pike was taken by Chris Eaton of team Basstopia with a 33 inch pike that took a close second and got him a beautiful bass print from Nick Mayer Art.  The 3rd place pike went to a familiar face, Matt Dickstein of team "Bad Monkey" will take hone a brand new Rio fly line.

Size matters in the DPC and this year it was Ryan Fitzgerald who gets bragging rights to the smallest bass award(Dink award). Ryan managed to land an impressive 5 inch bass.  For going small Ryan is getting a signed copy of Pat Cohens new book from RuSuperfly,  and assortment of Ahrex hooks and a box of midges for chasing dinks.

This year the water was low as every and at least 4 teams dinged or destroyed their props. The breakdown award goes to Nate Scott & Mathew Rogerson of team SS Minnow who used some ingenuity and went to ace hardware and bought a hammer and hammered their prop back into working condition to continue fishing into Sunday. For their efforts they will take home 2 bottles of Whistle Pig Whiskey & a bunch of Whistle Pig hand sanitizer.

Every year anglers get creative and play with words to pick a team name that stands out.  This year it was John Gamble & Mario Gagliardi of team "Is it 2021 Yet?" that spoke to the crowd and won the vote for best team name. Mario & John will be getting a couple of Orvis Hydros fly lines. 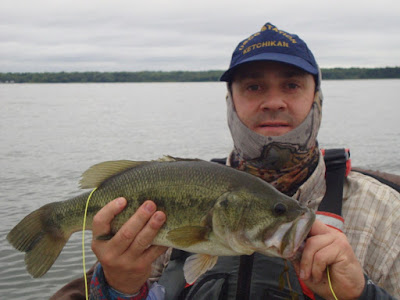 A couple years back we lost a friend and DPC participant Alex McDonald. We had talked about having a good sportsmanship award in his name. Alex was a passionate angler and amazing person all around.  Sometimes anglers go above and beyond and tow each other or lend rods to other anglers who broke theirs etc. This year angler John Dziedzic caught a large bass that would have won the big pickle side pool. At registration John had forgotten extra cash and did not enter. Instead of being upset & complaining John sent a heartfelt email taking about his late father Dan. Dan would always fish the tourney with him and encourage him to enter the big pickle. His email talked about his father looking down now and shaking his head saying "I told you so". So, this year the new Alex McD and Dan D award goes to John Dziedzic for being a good sport and appreciating what the DPC really is, a fun time to spend time with friends and family. John will get a fly line and a quart of maple syrup from Sterling Ridge Resort.

This year Costa Del Mar Sunglasses reached out to sponsor our event and offer two pairs of costas to the winner of a photo contest. The dramatic weather made for some amazing entries. The winner of the contest was Sean Platt who had an a great capture on the water. Congrats to Sean for the win. If you didn't win, don't fret.  For just submitting photos Costa is offering a free hat or shirt of choice to anyone who participated. 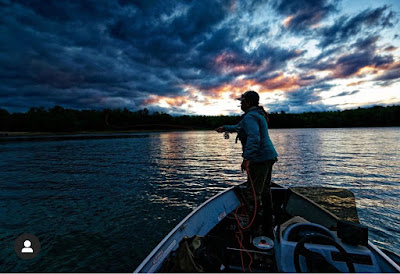 Finally, the big pickle this year was $930.00 in cash and was won by yours truly, Mike Kontos. I was lucky enough to battle a 19 & 3/4 in bass in an epic battle I won't soon forget. As tournament director, I will not keep the cash but instead donate it to the human fund. Just kidding, the money will be split three ways between the DPC, a charity of our choice and next years big pickle pool.

Well, that's a wrap! This year was different to say the least but we can't thank you all enough for participating in a safe fashion. We were not sure whether or not to even hold the tourney this year.  When I was collecting pickle sticks and we were winding down I looked out in the parking lot as anglers were leaning on their gunnels 6 feet across from each other laughing & I was reminded, the DPC isn't about catering or having a barn to party in.  It's about the people that make the DPC what it is and as i looked at the people laughing in the parking lot, for a minute things felt as normal as they have in a long while. See you all in 2021! Thx DPC Crew 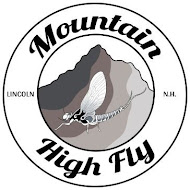